The whole of Yucatan is full of Cenotes, i.e sinkholes or caves filled with groundwater. The Cenote Zaci is located inte the middle of the town. However, it is not very suitable for babies (even though they have lifevests to lend you etc). It is rough paths leading to the cave, you have to climb big steps (you can forget about bringing a push chair) and the water is often a bit chilly. We asked in the hotel reception if they offer babysitting services and they didn’t. However, the receptionist overheard, called the woman that babysits for her while she is working, and all of a sudden we had a mexican babysitter, a qualified nurse (so we were told)!!  Off the four of us went for an afternoon in the Cenote Zaci.

So back to Zaci! It’s 2 blocks away from the central square and suddenly there’s what looks like a park, you pay to get in, walk down some stone steps and then walk through a cave , down more windy steps and you’re in the bottom of a giant cave filled with transparent water. From the top of the cave, water showers down, which our kids pretended was Giant’s weewee. Then you jump in the cool water filled with lots of black catfish. Totally amazing! 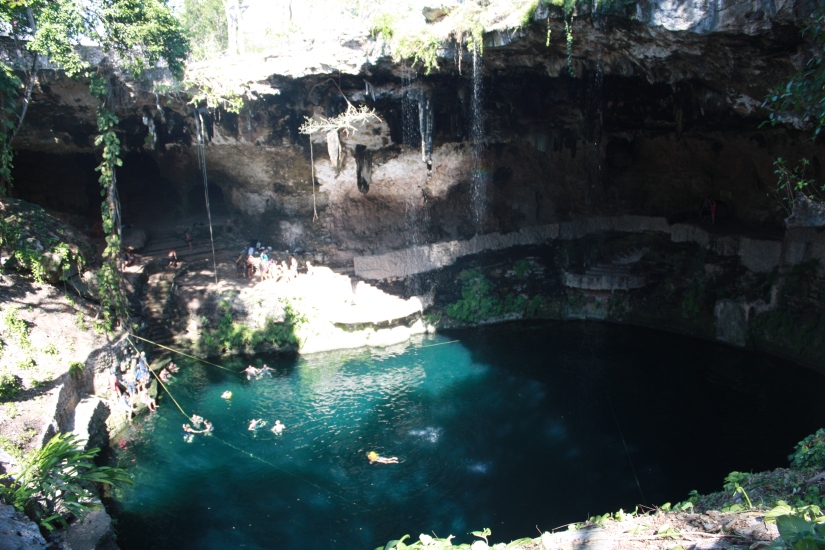 As we were walking down the steps into the water, Edward managed to walk onto a bee, which stung his foot. He starts screaming, which echoes across the whole cave, literally everyone is staring at us and our screaming child. We bring him into the water thinking the cool water would soothe him. His continuous screams are bouncing around this huge cavern with maybe 200 people staring at us, trying to work out why we’re torturing our child until he finally calms down 5 minutes later. He spent the rest of the day wrapped in a towel terrified he would get stung again. But even he thought it was fun swimming under the giant’s weewee! 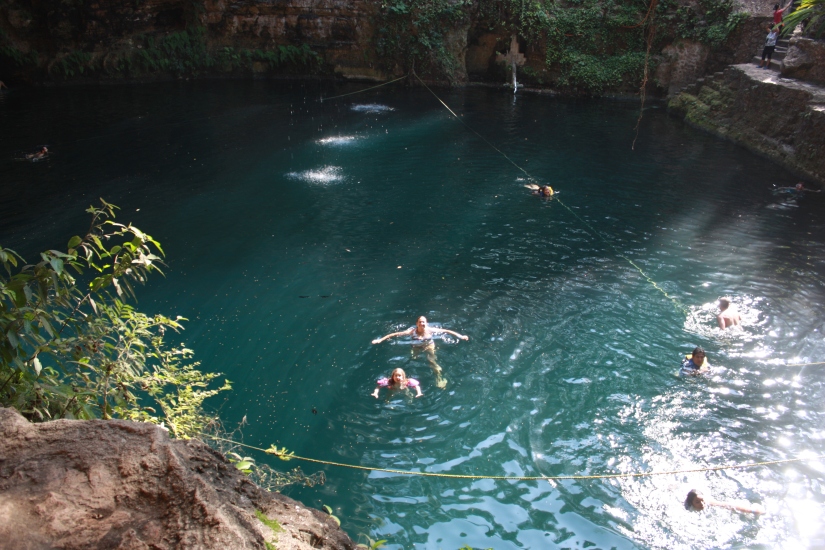 The babysitting turned out so well that we decided to do an even bigger excursion the next day. Alex probably had a better time with her than with us. She had given him a bath and they were just playing on the floor of the hotelroom, which we have not travelled to the other side of the world to do!

This time, we went to Ek Balam, a Mayan ruin city. Chitchen Izta is by far the biggest but it happened to be the Spring Equinox that weekend, when we would have accompanied 100,000 Mayan worshippers, so decided to avoid it. On the way to Ek Balam, we stopped off at Cenote Hubiku, which was breathtakingly beautiful. On the way there, we bumped into some Mayan warriors. 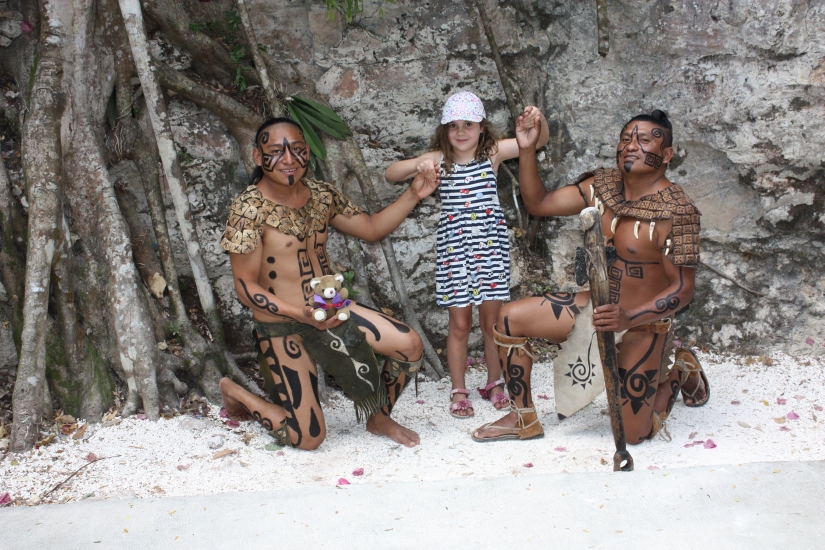 As you descended into a huge dark cold cave, a turquoise round pool fills the cavern and a perfectly round hole in the ceiling fills the cave with sunlight. Stalektites and a constant shower from the hole add to the drama. The water is quite refreshing but very much worth a swim. Andrea did a great film of Julian diving into the pool but unfortunately the playback was of a random Mexican family getting changed, so no video! 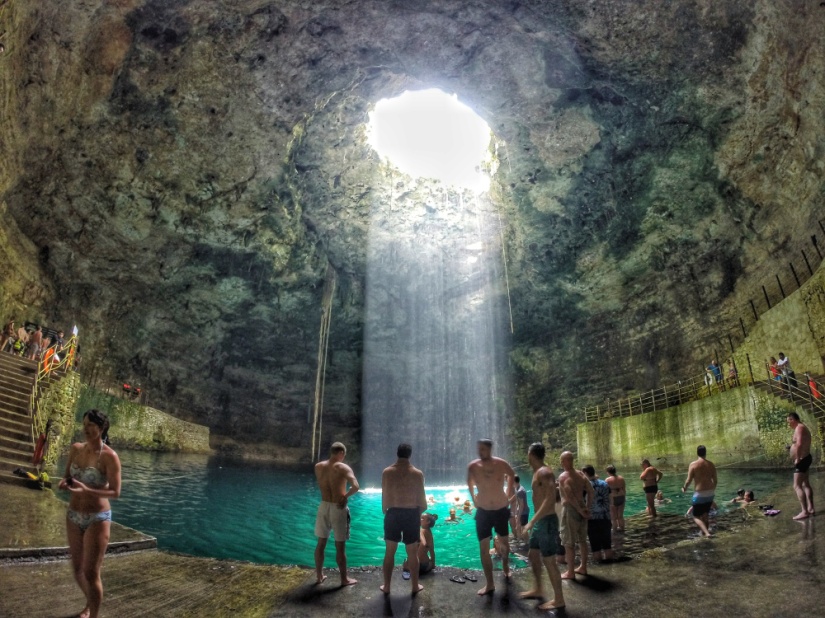 Ek Balam is a very old stone ruin city you arrive at after dusty roads through the jungle. After taking a taxi from town to the entrance, we then walked the long path to the ruins. At this point, Edward started arming himself with sticks and leaves in case we got attacked by a tiger (Shere Kahn in fact).

We arrive, start exploring the dark chambers and the kids rush around climbing on each of the buildings, loving the feeling of getting lost.

Then we see the acropolis with a crazy steep staircase. Elisa rushes all the way to the top, I help Edward climb the giant steep steps and Andrea goes up very slowly, feelingwobbly in the knees and very dizzy at the top. From the top, there are no signs of civilisation all aound, just jungle everywhere as far as the eye can see. 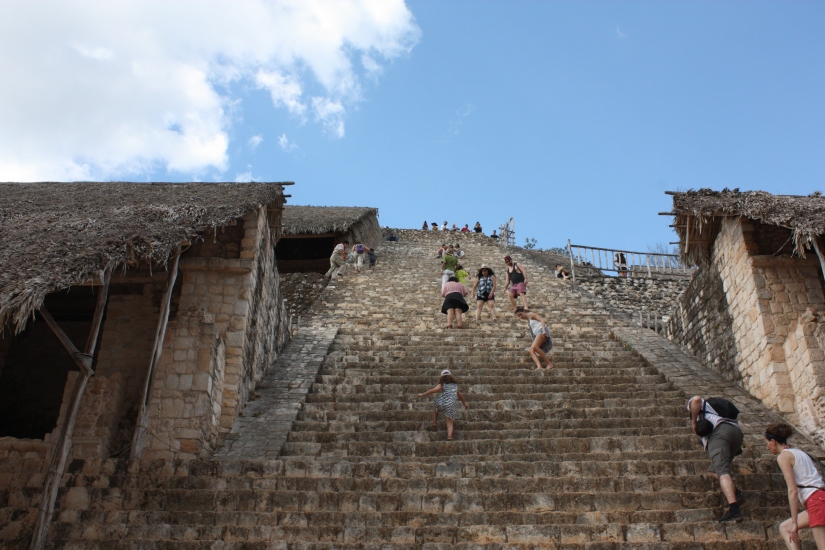 We very slowly make our way back down, sliding on our bums and check out the amazing trees with spiky trunks and fluffy fruit. 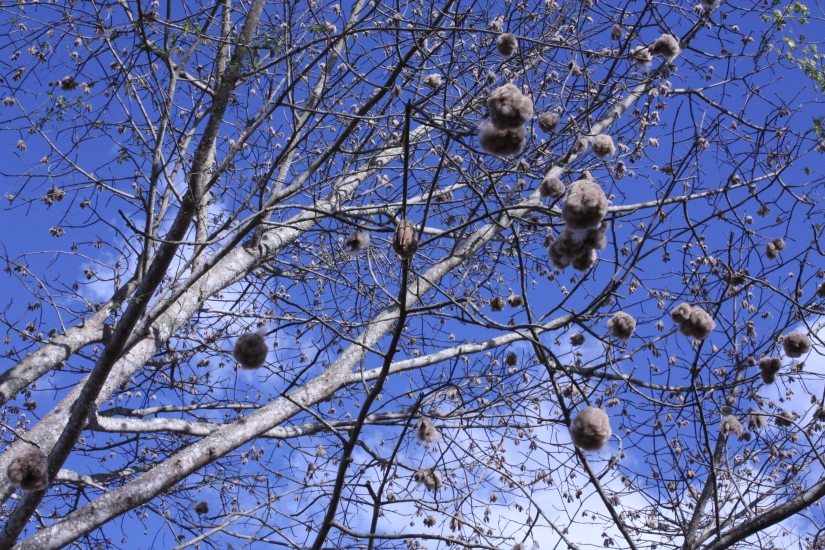 After a long time exploring, sweaty, dusty and tired, we make our way back to the hotel, to find Alexander delighted with his time away from us. When travelling with a baby, if you can get help with baby sitting to be able to do more active adventures with the older kids, we would very much recommend it!

1 thought on “Excursions in and around Valladolid”

This is a text widget, which allows you to add text or HTML to your sidebar. You can use them to display text, links, images, HTML, or a combination of these. Edit them in the Widget section of the Customizer.
Loading Comments...
%d bloggers like this: